So you heard me talk about #PSI on Twitter and you’re probably wondering.

What does PSI stand for?

What is the Prospect Success Indicator Model?

PSI is a weighted equation of various advanced metrics designed to cut through the incoming class and narrow the field to increase our hit rates. It does this by comparing those incoming rookie profiles to that of the average Top 24 wide receiver profile. It is then distilled down to a percentage, the Prospect Success Indicator Percentile Rank, which tells us how close these incoming rookies match to that profile.

FAQ: Does 90% PSI Percentile Rank mean he has a 90% chance of breaking out?

There is also a What-If PSI Percentile Rank, this score asks the question “What-if Marquise Brown wasn’t hurt during the pre-draft process, participated in all the events, and successfully completed them all?”

This percentile rank gives us a list of players who could’ve scored higher, perhaps top 50th-percentile, but didn’t due to incomplete data.

Finally, the model is comprised primarily of prospects who attend the combine each and every year. In addition, their profile must have a minimum of 1 year of college experience as a full-time wide receiver.

The tables below illustrate how many Top 24 seasons and wide receivers each tier has delivered both with and without adjusting for draft capital. Draft capital is important as it correlates directly with opportunity, and opportunity is king and that is evident in how much movement there is post-draft to the rankings.

Total # of Wide Receivers to Hit by Tier since 2010 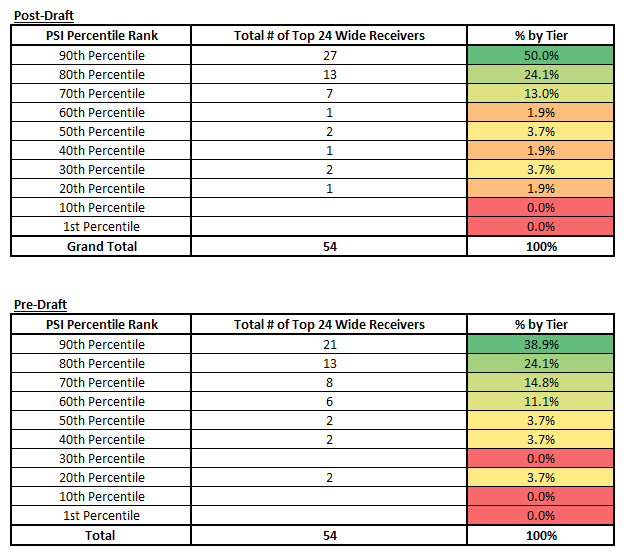 Below are all advanced metrics used to calculate PSI. If you want to learn more about certain metrics I have linked some back to their original source material.

How do I use it for both Pre and Post NFL/Fantasy Rookie Draft?