Gabriel Davis is the most under the radar wide receiver in the 2020 draft class. Davis is an early declare junior who started for three years at the University of Central Florida. He started 38 games during his time at UCF, catching 152 passes for 2,552 yards and 23 touchdowns, and averaging 16.2 yards per reception. Davis posted an impressive 72-1,241-12 line to close out his collegiate career. His final season 17.2 yards per reception puts him in the 81st-percentile among qualified wide receivers and highlights that he’s not merely a possession receiver, but an explosive playmaker with the ball in hands at the next level. 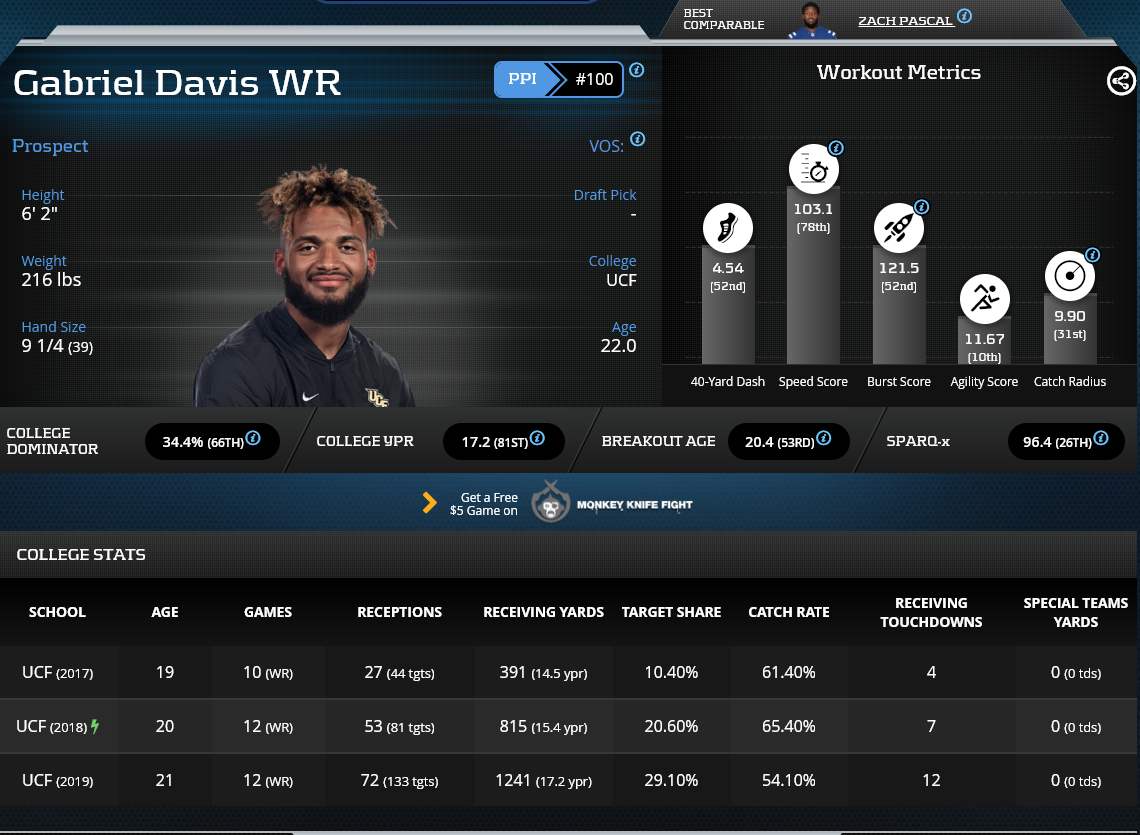 Davis came to the Combine at 6-2, 216-pounds, and has 9¼-inch (39th-percentile) hands. He ran a 4.54 (52nd-percentile) 40-yard dash, and his Vertical Leap (35-inches) and Broad Jump (120-inches) are both upper 50th-percentile. In the agility drills is where he face-planted. However, it should be noted that most everyone at the Combine in the wide receiver group face-planted this year, and there is reason to believe the shift to prime-time was the cause. Unfortunately, with all the Pro Days now canceled, this is the only evidence we have to measure his agility. Both his 3-Cone Drill (7.08) and 20-Yard Shuttle (4.59) place below the 50th-percentile and resulted in an 11.67 (10th-percentile) Agility Score.

Davis fits the profile of a wide receiver who is more than capable of delivering a surprise Top 24 finish in his career. His best comparable player is Zach Pascal, but being a slightly less agile Courtland Sutton is also in his range of outcomes. Currently, he has an ADP outside of the first five rounds, according to Dynasty League Football’s rookie pick probability tool. This absurdly low ADP means the dynasty community has not caught on to him yet, and he’s free at the moment. Remember his name for your rookie drafts as a third-round or later dart throw. Should he deliver a Top 24 season, only your league-mates will be shocked by it.

*Edit his Age and Breakout age are currently misstated on Player Profiler. Davis is in fact, 21 as of 4/1/2020.